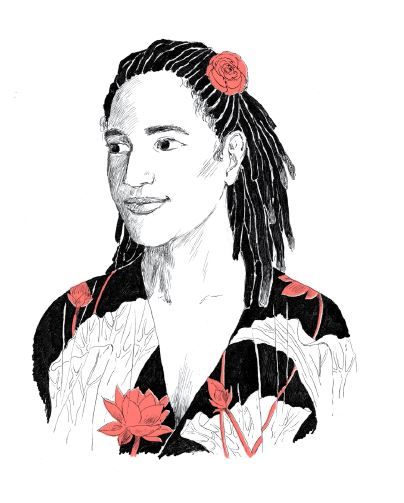 A french woman who moved to Brussels to continue her artistic education, comics author and illustrator Lison Ferné created the portraits for the book published by wbdm for its 15-year anniversary. We met with this humble, discreet, but still ferociously militant talent.

You came to Brussels to follow a course on comics. Why did you decide to stay in Belgium?

I liked the city from the start: its spirit, its very cosmopolitan character, the mix of languages and nationalities. I was eager to leave Paris, and Brussels was very welcoming. During my studies, I also had the opportunity to create a network for myself.

The worlds of art and comics are still very masculine. Is this the reason feminism is such an integral part of your themes?

Not really. Ecology and feminism are at the core of my DNA; they have been a part of me since childhood. We often think of the world of comics as masculine. However, there are a lot of girls in the schools. In 2016, the Angouleme festival shocked us with an entirely male selection. But the many voices that rose to denounce this lack of diversity showed that the new generation of authors intends to make themselves heard. When we women get together at comic book conventions, it’s nice to feel this new feminine and feminist trend, which I am proud to be a part of.

Your first album ‘La Déesse Requin’, was just awarded the Artémisia award for female comics authors, in the ecology section. What does this award mean to you?

In the comics sector, the work before an album is released is very isolated. This prize is therefore a reassurance about the quality of my work. I am also delighted to have been recognised in the ‘ecology’ category. This encourages me to continue to express very strong messages through my drawing.

In fashion and design, there is a lot of talk about the return to craftsmanship. You work in black and white, pen and Indian ink, mediums that re-engage with a certain tradition of drawing.

That is an interesting link, but I must admit that my approach is above all instinctive. At this point, I still do not have enough objectivity to put my practice into perspective, but whatever medium I use, I need to feel the contact with the material. I love the sensual side of the sheet of paper, the feel of the paint on the canvas, etc.

When you began working on the illustrations for the collection of interviews with creators and designers celebrating the 15 years of WBDM, what was your first thought?

I wanted to be sure the designers would be proud of their portraits. I asked the WBDM teams a lot of questions, in order to capture certain aspects of their personalities. I also wanted to add a playful touch, by transposing certain elements of their creations within the patterns of their clothes.

At the end of this work, how do you perceive design in Wallonia and Brussels?

I’m impressed by the very rich paths of its creators, artists and designers. Despite their level of excellence, you can feel that they do not want to take themselves seriously, they want to retain a sense of humour and accessibility in their approaches.

Tell us about your current projects.

I am working on two collections of illustrations. The first is about fantastic creatures. The second takes on mermen (male mermaids). I want to take a fresh look at male beauty and shake up some classical benchmarks.

Do you think the new interest in drawing and illustration is a reaction to our world being saturated with images, sounds and videos?

This question takes me back to my art history lessons. In the early days of photography, painters believed that their art had no future. However, nothing can supplant painting. I think drawing has the power to transport us to another world, outside of reality. In recent months, it has been clear that we need this.

Wallonie-Bruxelles Design Mode is closely collaborating with TLmag for interviewing a selection of Belgian talents in fashion and design from Wallonia and Brussels, in order to promote them on the international scene. Read more articles on TL Magazine.