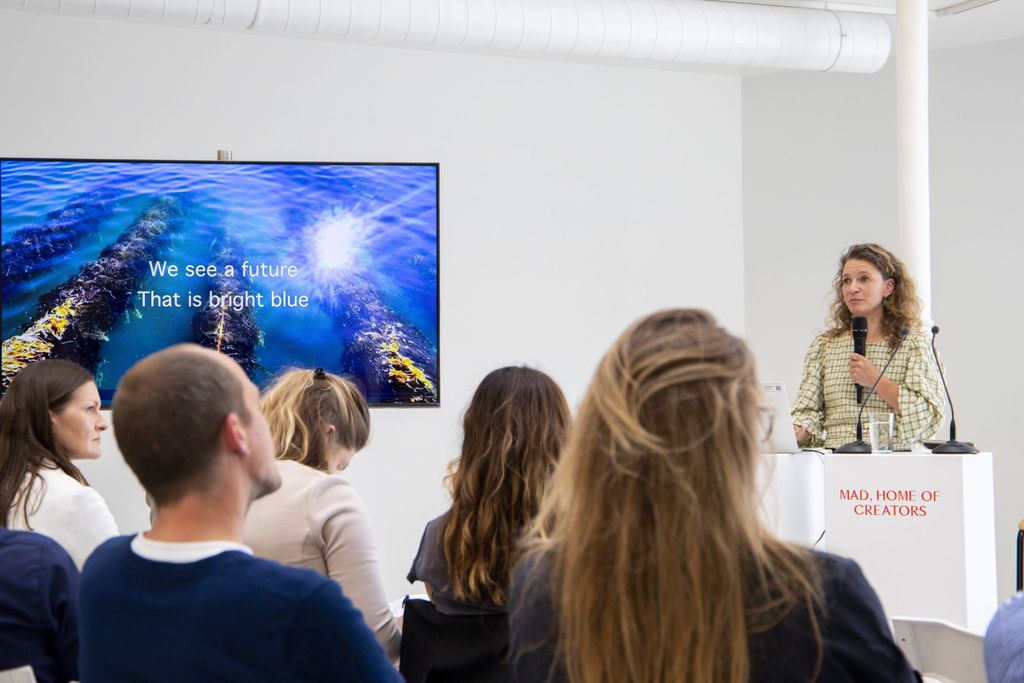 Building a Bright Future : sustainability, beauty and power of the collective at the heart of the debate

Held on 10 June as part of the New European Bauhaus, the creative equivalent of the Green Deal, this conference, organised by BEDA (the Bureau of European Design Associations) at MAD Brussels in partnership with various structures and organisations including WBDM, was an opportunity to create an outline for a more sustainable future. Beyond the obvious challenges that this theme entails, this meeting, which attracted speakers with a range of profiles, allowed participants to better understand the way in which the political institutions and the creative industries are planning the future through design.

Envisaged as a cultural project in its own right, aiming to give aesthetic meaning to the vision of a sustainable future, the New European Bauhaus must move beyond the ideas stage if it is to meet the needs and expectations of citizens. Masterminded by the very charismatic Lucas de Man, who has many different roles, including that of the Dutch Design Week ambassador in the Netherlands, the conference was preceded by the screening of The Object Becomes by Alexandre Humbert. This choice was all the more judicious as the pure, classy and highly cinematographic aesthetics of this film with a strong message produced by Belgium is Design resounded like an introduction, but also like an overview before the ten or so interventions that followed throughout the afternoon.

Revaluing the object manufacturing process. Putting the trades back at the heart of the concerns of designers and the public. Encouraging a better understanding of the object as a valuable asset to be accentuated. Developing education and training in line with the values inherent in building a sustainable world. During these two hours of meetings and exchanges, Lucas de Man and the other conference participants returned repeatedly to the idea of creating a new value system by asking one and only one question, ‘What is really important?’ The tone was set from the outset. What is important and intrinsically linked to the notion of change is the quest for a beauty that is certainly subjective but also sufficiently inspiring to become a driving force in transition.

Within the framework of these Europe-wide reflections on living spaces, as well as on the role of architecture and design in the construction of tomorrow’s world, it is essential, as Aurélie Champagne, cultural advisor in the French representation within the European Union, reminded us, to involve the public in these reflections, and to de-sectorise the debate. This notion of interdisciplinarity was repeated throughout the afternoon. Like a self-evident fact reinforced by urgency. The urgency of bringing together scientists and designers. This desire is already a reality for the French agency Big Bang Project. Its founder Guillian Graves explained how he reinvents the tools and methods of design by drawing inspiration from nature. Rethinking human activities by observing how the living world has adapted to change is a challenge facilitated by the pooling of diverse skills (economic, scientific and creative) and the creation of new tools. Like this ‘google of the living world’ developed by his agency, which is a tool aimed at offering designers access to certain scientific discoveries that could inspire them in their practice.

What if we no longer need to control everything? If the main idea of this conference could be summed up in one word, it would be ‘attitude’. This attitude is guided by a new way of creating, collaborating and not reinventing everything, but rather capitalising on what has already been solved. This idea of the collective working to create a more sustainable future was mentioned repeatedly in the testimonies of the creatives invited to speak at MAD Brussels. Anton Maertens, representing the start-up BC Materials, a company specialising in the transformation of excavation soil into building materials, also stressed the importance of capitalising on the human element in an ‘open source’ philosophy that provides great scope for beauty. This pragmatic, but also very poetic, approach by the Brussels-based start-up perfectly sums up the foundations of the New European Bauhaus. A key figure in Alexandre Humbert’s film, alongside other projects supported by Belgium is Design, BC Materials is part of this ‘new rise of design’ evoked by Marjanne Cuypers from BlueBlocks. For her, we have to go beyond the idea of ‘zero impact’ and move towards a ‘positive impact’ on the planet. She believes that periods of crisis such as the one we are currently experiencing are always driving innovation. The challenge now is to complete the process.

MAD Brussels, 6pm. Time for discussions between participants. But also time to rejoice. Today’s design is no longer in search of meaning. It has meaning and values. And its commitment is more collective than ever. The future will therefore be bright, as well as beautiful. And this time, no one will find it anecdotal or trivial.